Used to keep “witches” at arm’s length – in the belief that it was dangerous for the morally upright to touch a “witch”; it was essentially a type of modified pole-arm.

The point was used to push the accused’ the hook was used to bring the accused back to control. A protective phrase – “Jesus Nazarenum and Ave Maria” (translated) was inscribed upon the hook for further protection.

It seems that after a while, the alleged “witch” would be well-perforated and creased.

There is a public sculpture in downtown Brooklyn that is named Witch Catcher. 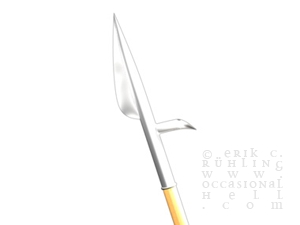