Weighing more than eleven pounds, this collar was fastened around the neck and rested on the shoulders. Originally used for the torture of prisoners, at times it became the means of execution as the abrasions and piercings became infected with gangrene and the victim lapsed into eventual coma. 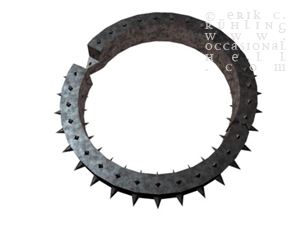 There are rumors that this collar is still in use in some parts of the world.