The Shrew’s Fiddle, or Halsgeige (neck-violin) is akin to other devices meant to humiliate and torture a person.

The head went through the larger hole with the arms clamped within the two smaller holes. In this way the person could be easily directed and pulled along. Some examples were chained together near the ‘neck’ of the violin (near the farthest hand), still others consisted of one long ‘standing pillory’ of two fiddles joined neck to neck by a solid piece of wood.

An iron version was used during the years of slavery in the United States.

The Shrew’s Fiddle was in use until the late 1800s. In practice, it was used much like the Barrel Pillory, the Branks, the Noise-Maker’s Fife and the more mundane Stocks (Pillory). 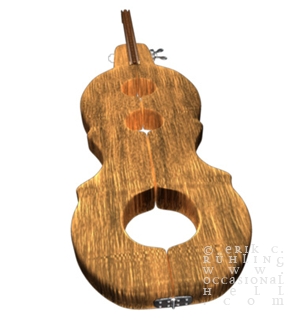