This was created when Sir Leonard Skeffington was the Lieutenant of the Tower of London. The term ‘scavenger’ was a corruption of ‘Skeffington’ – in Italy it was referred to as cicogna, or “the stork”.

Originally used as a bondage device in order to transport prisoners between two buildings, this device also caused painful cramping – most often in the abdomen and rectum. The neck was placed inside the hoop, the hands placed through the smaller loops, and the legs stuck between the bars with the feet locked into the bottom stirrups. This placed the prisoner into a painful foetal position with the knees and hands drawn up to the chin. Any kind of significant movement was painfully impossible.

Variations existed which allowed the torturer to slowly compress the distance between the knees and chin. This resulted in broken bones throughout the ribcage and spine. 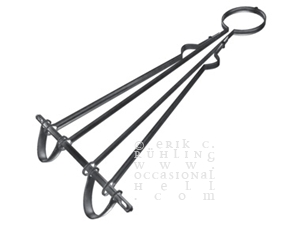 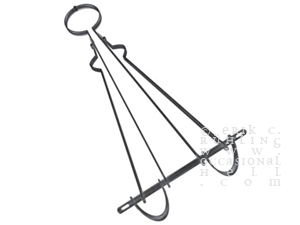