One of the most recognized and feared instruments of execution, the guillotine had existed in simpler forms since the 14th century. It was the French physician Joseph-Ignace Guillotin who refined the workings to a bloody efficiency, later used almost non-stop during the Reign of Terror.

The operation of the machine was simple – the victim would be bound to the bascule, a pivoting plank which was then tilted horizontally so that the victim’s head could be secured beneath the semi-circular lunette. The blade, weighted by the ram, would then be dropped, thus separating the head from the body. The head would neatly drop into a waiting basket, to be retrieved by the executioner and displayed to the bloodthirsty crowd.

Contrary to popular belief, Dr. Guillotin did not perish under the blade of his invention. He died of pneumonia in 1814. 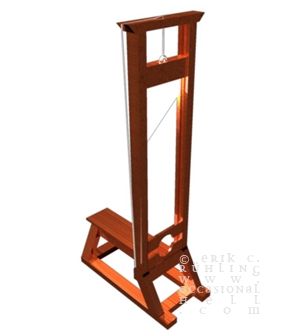