The gibbet or hanging cage was a ubiquitous sight throughout Europe. Made of slats of wood or iron, in myriad shapes and sizes, this device served as a simple punishment (the victim was displayed and eventually freed) or a slow, brutal execution (the victim was left to the elements, facing eventual death).
The bodies of executed highwaymen, covered in tar for preservation, were often displayed in these cages along rural routes. It was thought that this presentation would deter other thieves.

The remains were usually left in the cages until the bones fell apart. To discourage friends and relatives from attempting to retrieve the body, some cages were studded in nails.

The last gibbeting in England was of two murderers in 1832.

The poet William Wordsworth once encountered a gibbet and was panicked by the sight. 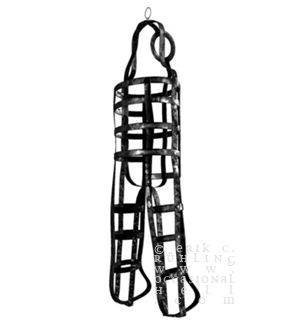