Used in various forms to execute criminals and heretics, the simplest form consisted of an upright plank with a hole drilled through containing a rope which would be pulled to choke the victim to death.

Later refinements included an iron collar which was drawn backwards to asphyxiate the victim, or a leather strap which held the head in position as a sharpened screw bored into the back of the neck, severing the spinal cord.

The term garrotte was perhaps derived from the Old French word for ‘cudgel’ – the wooden bar that was originally used to twist and tighten the rope around the neck. 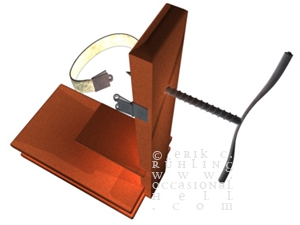