Used as a punishment for ‘scolds and shrewish women’. The woman was secured within the chair, the chair was hoisted by means of a beam set next to the river, and unceremoniously dropped into the river. After a length of time, the chair was raised and depending on the ‘shrewishness’ of the woman, may have been dropped again and again. Although mainly used as a means of punishment, this process resulted in its fair share of deaths by drowning.

Some of these were permanently housed beneath a bridge and could be dropped via a pulley system. Still others were used inside the village well, which doesn’t say much for the villagers’ ideas of cleanliness. 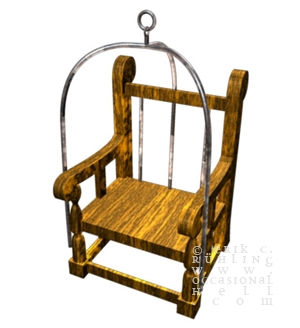 The ‘dunk tank’ found at numerous fundraisers operates similarly to the ducking stool, although there is no evidence that it is a descendant.