“Girdle of Purity”, “Girdle of Venus”, “Florentine Girdle”: some of the names of the device better known as the Chastity Belt. While not an object used in the dungeon, the belt was responsible for more than its fair share of anguish.

The scene of the lord going off to crusade while locking his lady into a chastity belt was a staple of romantic literature, although the reality was that the belts were never intended to be worn for extended periods, at most being worn as a barrier against rape.

There were two forms of the belt – the ‘partial pudenda’ which surrounded only the vagina with outwardly pointing teeth (sometimes spring-loaded), and the ‘full pudenda’ (the one pictured), which prevented both front and rear entry. 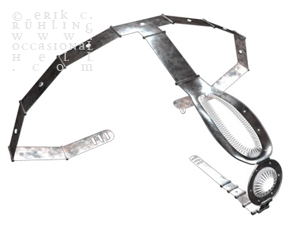 In the Odyssey by Homer, an angry Hephaestus forges an ingenuous device that traps his wife Aphrodite and her lover Ares while they are in flagrante delicto. 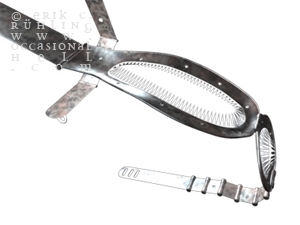